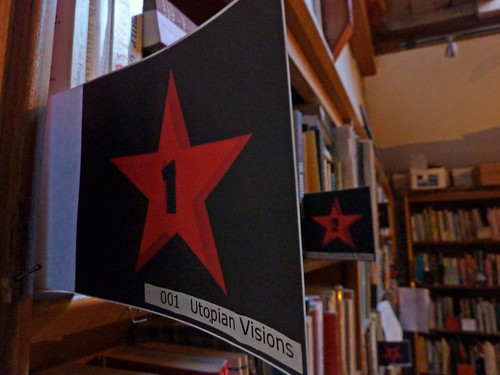 For some time now, I’ve been interested in the more political aspects of the profession and how they can be brought to the fore a bit more. From my perspective, the profession in which we work is inherently political. Everything about what we do is political, particularly when we live in an era where information is repackaged as a ‘commodity’ that has a price. Under such conditions, how can we consider ourselves anything other than political?

To my mind, however, there are many aspects of the profession that do not reflect this central political element. The degree, the professional body, the institution of the library. We are rapidly, in my opinion, undergoing a process of depoliticisation. This, for me, is a dangerous proposition. As the belief that information is a commodity continues to grow, our rapid depoliticisation removes any obstacle in the way of a very neoliberal conceit. I would argue that in the face of the neoliberal assault, a process of radical politicisation is not only desirable, it is essential.

This process of radical politicisation must begin in our universities. As has been repeatedly argued, there is something missing from our library qualifications. There is not, I think, enough emphasis placed on the political aspects of our profession. We are not schooled to understand the political environment in which we exist. We are not appropriately equipped to comprehend the political and cultural battles that are being waged around us, let alone how to respond. The result is that, as a profession, we find ourselves acquiescing to the destructive ideologies that run counter to our own ethical beliefs. But how do we tackle this? How can we engender the changes we desire when universities themselves have capitulated in the face of the ideological assault? What actions should we, as professionals, take to ensure that future LIS graduates are properly equipped to deal with the political challenges we face?

Then there is the professional body. I have written about this several times before and I continue to believe that it needs to open itself up more to its members, become more transparent, more democratic and be led by its members, not from the centre. As I wrote for InfoToday Europe last year:

“It should ensure all meetings are recorded and publicly accessible, publications should be open access by default and all decision making processes should be transparent and engage with the membership. In an age of rapid communication, organisations should be member led rather than led from the centre. The internet provides an important opportunity for such professional organisations to open themselves up and allow the membership to lead on the direction it is to take. The information profession should be bold and radical in seeking out ways to embrace the new landscape and incorporate it into its structures.”

And then there are the libraries themselves. Are they not rather conservative in nature? Aren’t the solutions that are offered to create a “21st century library service” rather conservative? Maybe we could offer something different, something radical, a more co-operative approach to the delivery of library services? Something that is a true partnership between the user and professionals. Is there anything we can learn from, for example, the higher education co-operative of the University of Mondragon? If we can democratise the institution of the library, perhaps it is possible to create a true alternative to the conservative models adopted and advocated. Is it possible, within the hierarchical structures in which libraries reside, to create something where the hierarchy is significantly flattened? And if it is not possible within the overarching hierarchical structure, how can we best tackle and challenge this to create something democratic, co-operative and radical?

Ultimately, I would like to explore the alternatives and see how it would be possible to construct an alternative path for the profession in general and the institution of the library. This may, of course, have overlaps with other sessions attendees may wish to propose, in which case I would happy to cede to others or to find ways to accommodate similar themes into a single session.